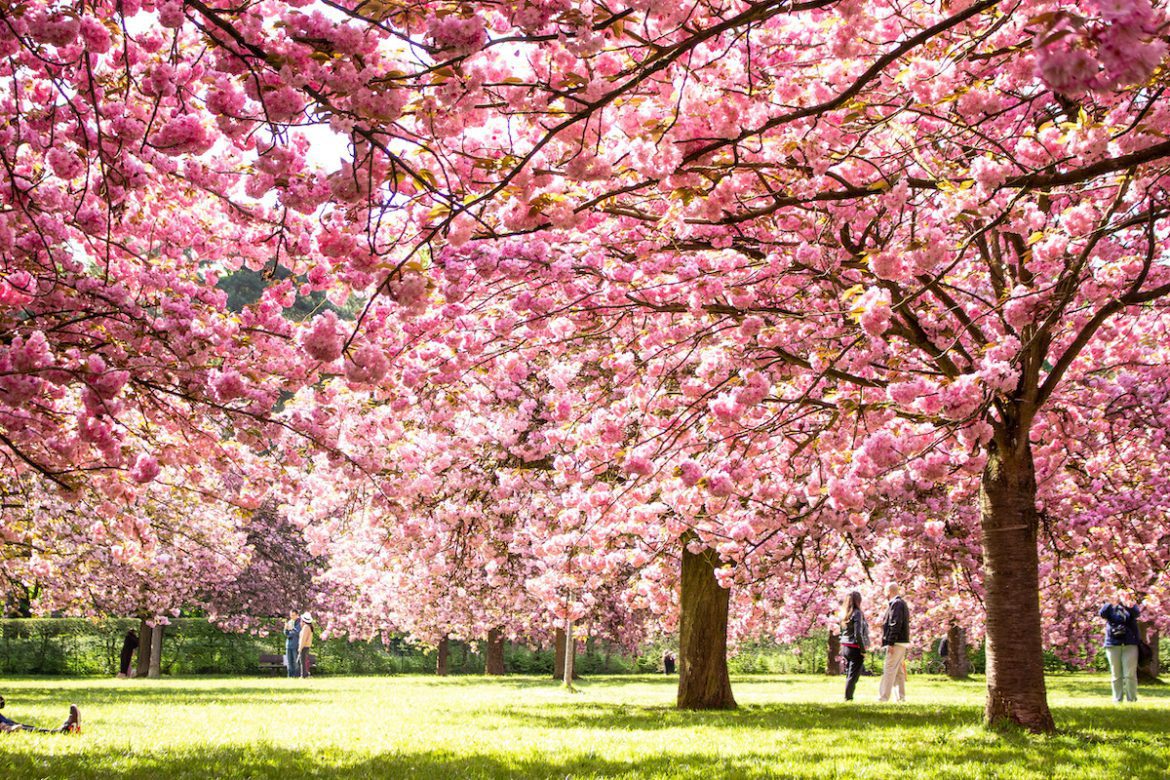 Paris holds many treasures within its 12 arrondissements, but there’s a wealth of things to be seen just outside of its borders. If you’re thinking of coming to the city for a week or more, consider including one of these secret Paris day trips into your visit. Whether you pick a blossoming park, a grand chateau or a medieval town… you won’t regret these mini detours!

Below, check them out and find out how to get there!

Parc de Sceaux, an ideal escape less than half an hour from Paris, is a pretty domaine with a grand château and gardens. It is particularly famous for its stunning cherry tree orchard, which comes into bloom for a few weeks in April. Inspired by Japanese hanami festivals, the domaine put on a special two-day event for the occasion, complete with Japanese music and picnics under the sakura trees. There are also musical concerts organized around the year, from open-air opera to jazz groups, all performed on the resplendent grounds.

Beyond that, the grounds, lake and château are a beautiful backdrop for lounging and soaking it all in on any day. This is a secret Paris day to enjoy the great outdoors – pack a picnic basket, bring a blanket, a set of boules or a book and you’re set!

Getting there: Parc de Sceaux or Bourg-la-Reine on the RER B from central Paris.

(Free entry to the garden)

Château de Fontainebleau is a UNESCO World Heritage Site and one of France’s largest royal châteaux. It has been inhabited by members of the French royal family for the past seven centuries, including Marie-Antoinette and the Emperors Napoleon and Napoleon III.

As one would expect of a château of that era, it is positively spectacular, with incredible ornate ceilings and lavish decor as far as the eye can see. There are a variety of guided tours offered, such as Marie-Antoinette’s boudoir and the Imperial Theatre. Afterwards, you can stroll around the château’s impressive gardens or hike in the surrounding Foret de Fontainebleau. For a less active option, head into town to grab a bite at one of the classic bistro restaurants.

Getting there: Enter the Fontainebleau-Avon station at Paris Gare de Lyon, take Bus no. 1 for Les Lilas, and get off at the “Château” stop.

A secret Paris day trip fit for royalty! Despite being 90 km to the southeast of Paris, Provins is still in the Île-de-France region. A UNESCO World Heritage Site, Provins is arguably the best place to plunge yourself into the spirit of medieval France. You can’t miss the Tour César: the famous 7th-century keep that offers gorgeous panoramic views of the town, and be sure to traverse (at least some) of the 1,000+ meters of ramparts and fortified gates, built between the 11th and 14th centuries. Provins is also home to a unique variety of rose, which you can find in the lovely rose garden; there are also several lovely fragrance products presented for purchase in the town’s shops. Provins is most famous for the Les Médiévales de Provins – a weekend-long festival filled with parades, shows and activities, all in traditional medieval clothing! Held in the middle of June, this is a unique occasion to see the town’s special heritage truly come alive.

Getting there: Take the train on the Transilien P line from Paris Gare de L’Est.