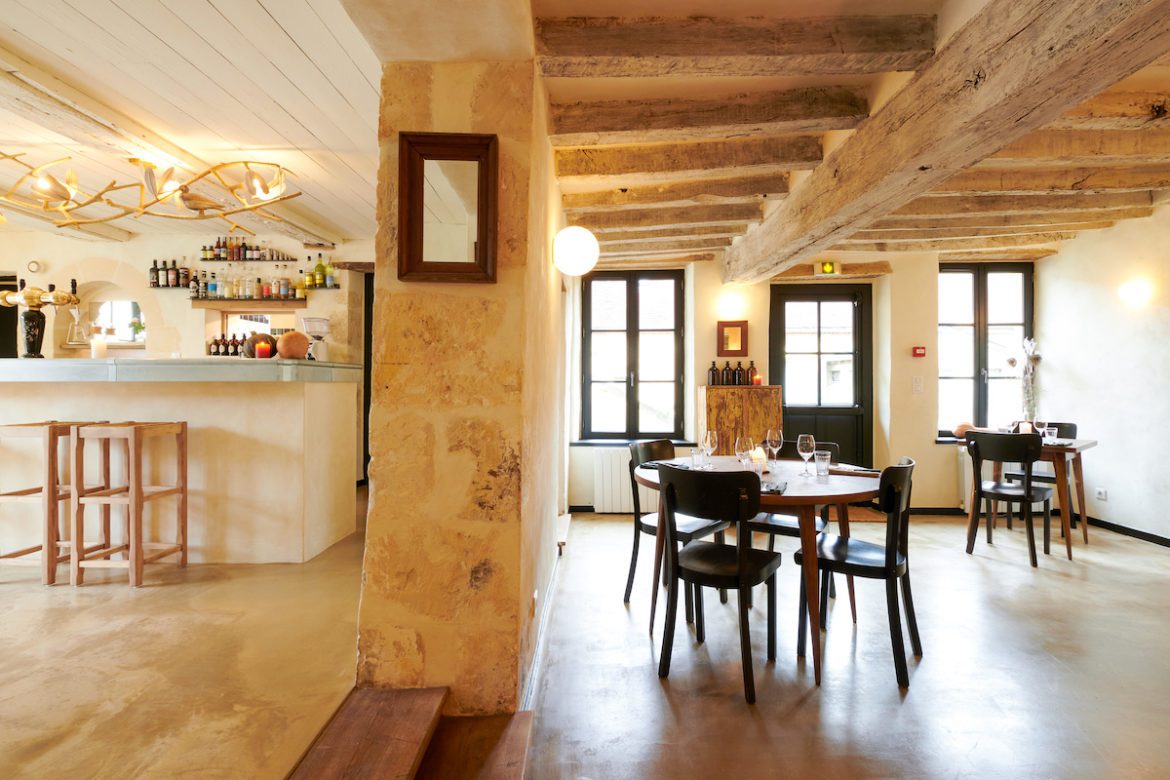 Those of you who have joined an MFCH Normandy Antiquing Tour already know the secret: le Perche region is a “Sleeping Beauty,” slowly awakening from a bucolic slumber. Spread over five départements, it has a strong geographical and architectural identity all of its own, formed by vast forests, orchards, rolling pastures, impressive castles, manor houses and pretty, unspoiled villages. It is also a true antique and brocante paradise that MFCH loves to visit, and now, increasingly, a food lover’s hotspot.

In any city or region, it often takes just one restaurant opening to define a movement. In Paris, places like La Régalade, Le Chateaubriand, or, more recently, Bouillon Pigalle, fused consumers’ unexpressed desires with new chefs’ styles into a full-blown trend, or, as apparently we now like to call it, a “vibe shift.”

Le Perche’s recent defining moment was the opening of d’Une île, a restaurant with impeccable ethical values and luxurious rooms, tucked between fields and forest in a charming country courtyard, edged with a farmhouse and old barns. It was created by the duo behind super-cool Parisian restaurants Septîme and Clamato, led by Bertrand Grébaut and Théophile Pourriat, and was soon coaxing Parisians out of their cosy weekend homes nearby with inventive cooking, natural wines and a lovely bistronomic atmosphere.

Over the past few months, there have been more exciting openings, as le Perche becomes one of France’s favourite green, pleasant hideouts, with plenty to offer besides marvellous cider, black pudding, butter and cheese.

Here’s a round-up of the old favourites and newcomers we like best. Who knows? If you join one of our MFCH tours, you might be visiting one soon!

A brand-new village general store and café with an interesting approach. Managers Elodie and Vincent had been looking for a lifestyle change for a few years, and when the opportunity arose to open an old fashioned épicerie in the picture book village of La Perrière, they jumped at it. Working with the local mairie, their objectives were not only to provide all the upmarket and sophisticated ingredients weekend-ing Parisians take for granted — from luxury tinned sardines to vegan noodle broth — but also to cater to local residents, every day. The result is a joyous, light-filled store, where you can pick up local ciders and fruit juices, vegetables, meats and cheese, as well as a fantastic array of chic homeware and household equipment. On Mondays, Tuesdays and Wednesdays, Elodie cooks a plat du jour to take away. On the weekends, roast local chicken and potatoes are on order for late or lazy cooks, and there’s wine tasting and coffee in the garden when the weather is fine.

In Nogent le Rotrou, Franck and Cécile Carré opened their noisy, bustling bistro at the end of 2021. Friendly and lively, the cooking is generous and gourmand. We especially love the giant truffled chips, delicately marinated salmon and fantastic natural wine list. They even have a wine cave, with options for takeaway!

Cécile and Franck Schmitt opened their concept store, gîte and salon de thé in 2018, part of their magnificent old rectory in Bubertré. Selling antiques and collections from the Schmitts’ regular travels to Morocco and Portugal, it’s the perfect spot for afternoon tea and a stroll in the garden after a day’s intensive shopping in le Perche.

Well before all the newcomers, there was Après L’École. Sergueï and Solange opened their large, open, high-ceilinged “canteen” in the beautiful, old school of St. Cyr L’Ecole in 2018, mixing relaxed, affordable cooking with brocante and art exhibitions. It quickly became a Percheron institution, as well as a mecca for natural wine enthusiasts. Just like le Perche, it’s charming, warm-hearted, welcoming and unmissable.

Chef Sven Chartier trained at Alain Passard’s 3-Michelin-starred L’Arpège and subsequently gained his own “macaron” (as they are called in the business) for his sleek restaurant, Saturne, right by Paris’s stock exchange.  In 2019, he sold up, looking for a change of pace and scenery, and moved to le Perche with wife, Marianne, and their children. At the end of last year, they opened their brand-new bistro, Oiseau-Oiseau, on the old church square of the typically charming Percheron village of Préaux du Perche. The two rooms are wood and stone-clad, softly lit with light fixtures by artist José Estèves, featuring his signature birds made from reclaimed materials, and warmed by fireplaces. It’s already a beautiful, serene space in winter, and we cannot wait for the finer days until the terrasse opens and tables can spill outside.

Sven’s menu is short and thoughtful, produce is ultra-local, ethical and sustainable, and wines, selected by Sven’s sommelier brother, Nils, are natural. All the bistronomic codes are covered, including the laid-back, no-need-to-dress-up atmosphere, bare-topped tables and classic French dishes refined and twisted. We loved the foie gras-laced pâté en croûte, the melting pork belly, Mont Blanc in sorbet version with a lime kick, and a wonderfully decadent, peanut Paris-Brest.