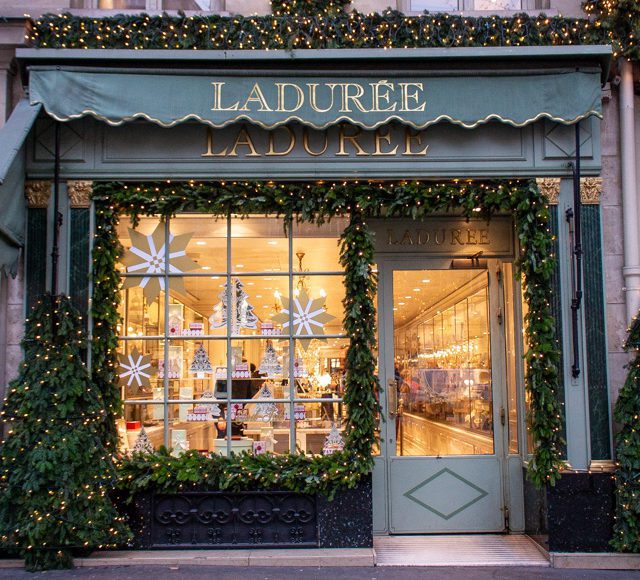 There is nowhere quite like Paris at any given time, but there is something particularly special about the city during the holidays. From twinkling streetlights and passageways, to larger-than-life Christmas trees, to beyond decadent shop displays, it truly is the season for the City of Light to sparkle brighter than ever.

Below, we’ve rounded up some delightfully festive scenes of Paris during Christmas.

It had to be first… locals and viewers from afar wait all year for the unveiling of Paris’s famous department store, Galeries Lafayette, to reveal their astounding annual Christmas tree and decor.

Equally as awaited is the bountiful trimmings of one of Paris’s other most famous department stores — Le Bon Marché (this year decked completely out in white!).

Wherever you turn, on any Paris street, you’ll likely find lights, garlands or even a whopping fully-trimmed Christmas tree.

Ah, j’adore Dior… but especially in Paris during Christmas. This season’s ensemble includes a larger-than-life sparkling snowflake and a glowing hot air balloon sculpture you can actually go inside for a picture!

Parisians really do go all out during Christmas — can you tell? You may have a tree in your home, but who says you shouldn’t have one in your car, too (spotted at Place Vendome)?

Speaking of Place Vendôme… it has a few stationed trees of its own! And by few, we mean no less than a dozen.

When winter approaches, and the Champs-Élysées begins to glow red, you know Christmas is near.

You’d be hard-pressed to find a shop in Paris — no matter what wares they are selling — to not have a little (or a lot) of Christmas flair!

How to Gift My French Country Home Magazine