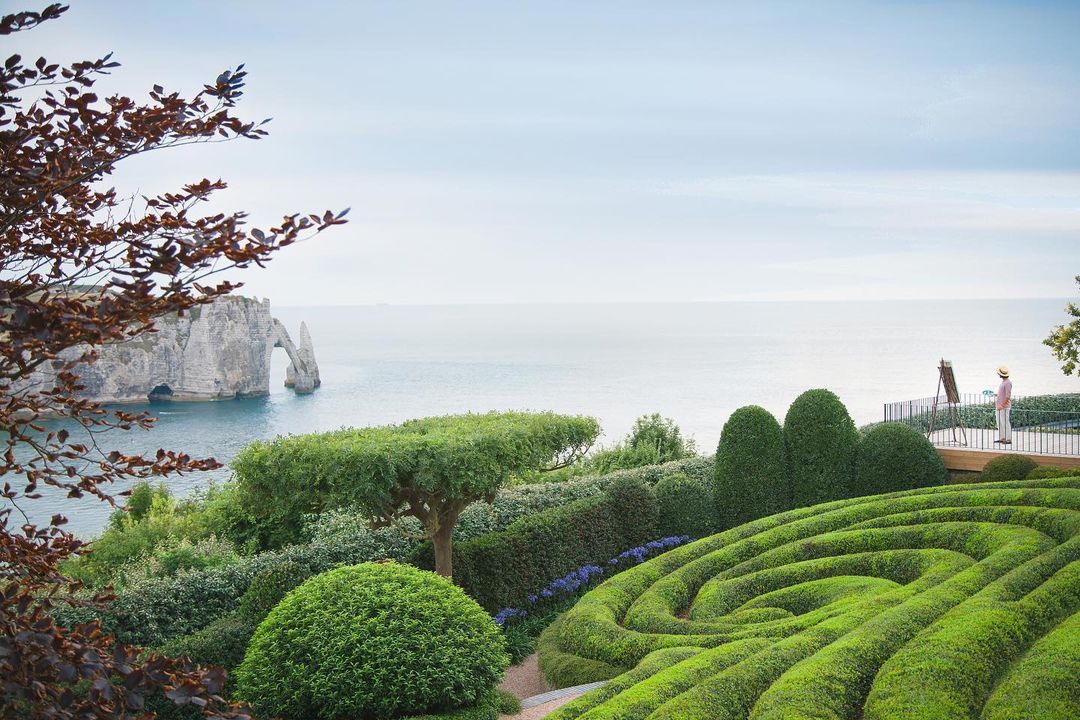 If you are seeking inspiration for your next voyage, look no further than our carefully curated travel guide to France. Start daydreaming of fields painted violet with lavender blooms in Provence, the pastel-hued glamour of the French Riviera, fairytale châteaux amid the rippling hills of the Loire Valley as well as the glittering capital and more.

Below, find our comprehensive guide to discovering France in just two weeks.

Of course, no travel guide to France is complete without stopping by one of the chicest travel destinations in the world — Paris. Make every moment of your two days in the magical City of Light count: embark on a leisurely meander that starts off at the Ile de la Cité, pass by the historic Notre-Dame and cross into the atmospheric beauty that is the bustling Latin Quarter. Wind through its narrow cobblestone streets, admiring the city’s wealth of swoon-worthy pâtisseries, cafés and boutiques, then finish off your morning at the famous Sainte-Chapelle. Later, spend the afternoon marveling at magnificent art at the Louvre. As night falls, take a twilight promenade to Place du Trocadéro before a trip up the illuminated Eiffel Tower.

On your second day, take a stroll that starts from the splendor of the Arc de Triomphe down to the Avenue des Champs-Élysées and its surrounding areas. Be sure to also stop by the enchanting Tuileries garden — comprising more than 55 acres — for a true botanical delight.

With Paris as your base, make your way to the opulent city of Versailles — a mere 45-minute drive from the capital. Any itinerary here should include going to its iconic palace, the Château de Versailles, and discovering the resplendent visions of its Galeries des Glaces (“Hall of Mirrors”) and labyrinthine gardens. Don’t forget to stop by the artful display of vegetable beds and fruit trees at the nearby Le Potager du Roi (Louis XIV’s vegetable garden), as well as peruse the charming Marché Notre-Dame (hunt for antiques on nearby rue Rameau!).

Order our Jan/Feb 21 issue for a full, detailed guide to Versailles!

Admire the Gothic architecture of the Rouen Cathedral in this quaint city’s old town with a fiery past: a few steps away lies the ancient square (Place du Vieux-Marché) where Joan of Arc was burnt at the stake in 1431. Afterwards, takes an hour’s drive to Giverny to see the wonder of Claude Monet’s house and gardens: an impressionist painting that comes alive in a dreamy kaleidoscope of color.

Explore the windswept stretch of Normandy’s coastline, make a brief pitstop to see the picturesque Honfleur and its harbour and enjoy some freshly caught seafood for lunch. Stay the night in Bayeux to discover its historical charm, as well as its UNESCO-listed tapestry. Over 230-feet-long, this embroidery, dating from the 11th-century, depicts the conquest of England by Duke of William of Normandy in 1066. Explore the art of lacemaking at the Conservatoire de la Dentelle (a regional tradition that traces back to the 17th-century) and walk the pristine shores of the nearby D-Day Landing Beaches.

Next up on our two-week travel guide to France, it’s time to explore the magical, otherworldly island of Mont Saint-Michel, found on Normandy’s northwestern coast. A tiny, world-famous village — thanks to the spectacular, dramatic appearance of its cliff-top abbey (Abbaye du Mont-Saint-Michel) founded in 966 —explore the island’s breathtaking surroundings to feel as if you’ve stepped back in time.

Gaze upon a splendid array of châteaux while immersing yourself in the verdant, sweeping countryside of the Loire Valley. With the pleasant town of Ambroise your base, tour its own majestic château as well as the elegant Château de Chambord— the largest of its kind in the region. Marvel at Chambord’s bewitching interiors (including its double-helix staircases), an architectural feat combining Italian Renaissance and medieval French features. Afterwards, amble through the sprawling, immaculately kept gardens.

Venture on to the nearby Château de Cheverny for exquisitely decadent interiors — including a marvellous 17th-century Gobelin tapestry. After, tour the former home of King Henry II’s mistress, Diane de Poitiers (and Catherine de Medici’s), at the Château de Chenonceau. Stretching across piers over the Cher river, it is one of France’s most beautiful castles and accompanying vistas.

A trip to the château of Villandry and its gardens are also a must while in the Loire Valley. Be captivated by its perfectly landscaped, ornamental “kitchen garden” — a 16th-century-style maze of vegetables and flowers planted in a geometric fashion in alternating rainbows of color.

Make Avignon your base for the next couple of days to see the surrounding areas of the South of France and explore this ancient and romantic Provençal city. In Avignon, wander along the Saint Bénézet bridge for peaceful panoramas of the Rhône, as well as the charming Palais des Papes. During the summer, the former papal palace is illuminated at night with its magnificent annual light show, the Les Luminessences d’Avignon, and definitely worth seeing.

To see the famous southern French lavender in bloom, pay a visi to the 12th-century Sénanque Abbey, less than an hour’s drive from Avignon. The postcard-pretty villages of Gordes and Roussillon are excellent options to view the violet-washed fields, too. If hunting for second-hand bargains and antiques is what you are after, then fit in a trip to L’Isle-sur-la-Sorgue. Renowned for its brocante, traipsing through the town’s fairs is well-worth exploring.

On the next day, drive towards the glittering shores of Cannes, stopping by Saint Tropez to go to its beach (plage de Pampelonne), peruse its high-end boutiques and indulge your sweet tooth with the town’s very own dessert, the tarte Tropézienne. Continue along with the glamorous beauty of Cannes, leisurely strolling La Croisette (its famed boulevard) and the Old Port; there is an abundance of fine dining options to choose from here. Treat yourself to a well-deserved, decadent dinner with unrivalled views of the Riviera after a full day’s exploration.

This lively city’s stunning Belle Époque architecture is truly a sight to behold in the Old Town, as are the views you’ll see from climbing the stairs of the Colline du Château. Sampling a Niçois classic, such as the pissaladière (Editor’s note: anchovy, onion and black-olive tart) with a crisp, local rosé wine at the beachfront (along Promenade des Anglais) is a must. Make time for Nice’s plethora of art museums, too — from Henri Matisse to Marc Chegall. For souvenirs, find authentic boutis (Editor’s note: Provençal quilts) at the charming boutique, Porte du Sud.

Nice is idyllically located for car (or bus) day trips to some of the Riveira’s most beautiful towns and fishing villages — all of which are accompanied with beautiful Côte d’Azur views as you journey through winding hills.

Our final recommendations as part of our travel guide to France involves exploring first the sun-splashed village of Villefranche-sur-Mer with a picturesque walk to nearby Beaulieu-sur-Mer. Next stop is the medieval hilltop town of Èze — home to the iconic fragrance house Fragonard, whose 18th-century factory is open to the public (with a shop to browse, too!). Monaco is also en route (a mere 35-minute drive from Nice), but it is the pastel charms of Menton (affectionately known as the “Pearl of France”), which is located on the tip of the Italian border, that is the most remarkable place of them all.

Montmartre in the Snow