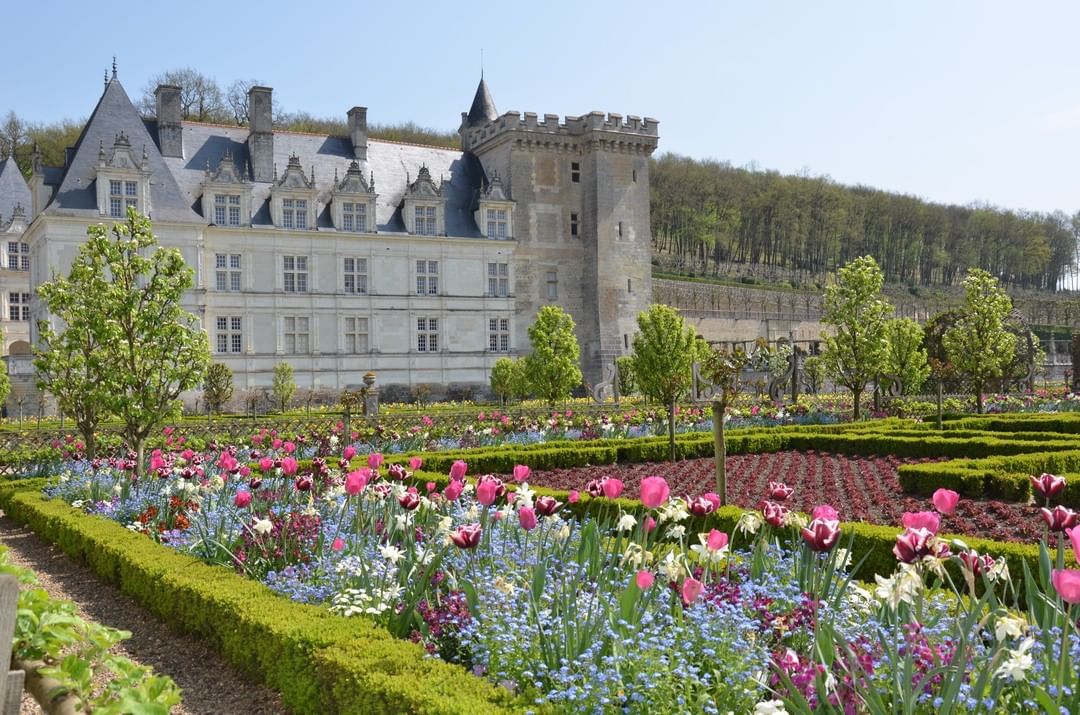 Discover marvelous blooms and breathtaking displays of horticulture that take over the lush landscapes of France when the weather warm and the calendar chimes spring.

We’ve rounded up a grand list of our famous French gardens that are best explored this beautiful time of year.

The spectacular gardens at the Château de Brécy come alive in springtime, with budding tulips and hellebores taking center stage in this glorious landscape. Dating back to the mid-17th century, this formal, famous French garden is nestled between Caen and Bayeux in the sweeping Normandy countryside.

Discover here its little quirks: four levels of terraced gardens which become increasingly wide for perspective and all of which are connected by stone staircases. Featuring ornate balustrades and exquisitely sculpted topiary, the Jardins de Brécy are a bucolic haven that can be easily enjoyed on a crisp spring afternoon.

This billowing rose garden’s fragrant blooms (featuring a romantic mélange of over 450 different kinds of roses!) make this place a horticultural wonderland in the charming commune of Meung-sur-Loire. Situated near the verdant Loire Valley, it’s been masterfully cared for by husband and wife Stéphane and Aline Chassin.

This famous French garden was crafted in 2002 (alongside their renovation of a 16th-century farmstead) and was opened to the public in 2005. An absolute pleasure to visit, amble through the garden in spring just as the roses begin to flower, leisurely perch on a pergola and admire the scene that surrounds you.

The Hanging Gardens of Marqueyssac

A jade-hued swirl of 150,000 looping box hedges that wrap around a late 18th-century château, this unusual pastoral landscape is one of the most famous French gardens, and rightly so. Julian de Cerval (who inherited it) spent the last 30 years of his life transforming the garden into the wondrous place it is today. Close to the picturesque medieval village of Beynac, perched high above the river Dordogne, its maze is otherworldly; the gardens appear to be floating above the valley, which steeply falls away as if by magic.

Open to visitors every day of the year, expect to see peacocks (the symbol of the gardens) roaming as freely as the visitors walking around. You’ll be blown away by the awe-inspiring panoramas of the surrounding Périgord region, with paths leading to a gorgeous belvedere so you can take in the valley below.

Widely considered to be one of the most beautiful and famous gardens in France, the Saint-André Abbey Garden, is a must be on your itinerary for your next trip. The gardens of this historic monument imbue pure romance: a maze of hundred-year-old pines and colorful flower beds mingle with ornately detailed pergolas and urns.

Saint-André is a Benedictine abbey originating from the 10th-century that was partially destroyed during the French Revolution. Restored in the 17th-century, the abbey and its gardens are now open to the public and a pleasure to wander through, offering splendid views of the historical city of Avignon and the Rhône valley.

The Gardens of Eyrignac

Explore this incredibly unique display of topiary art, meticulously cared for year round by a dedicated team of gardeners. Nestled in the center of Périgord Noir in the beautiful Dordogne region, the gardens comprise almost 24 acres of sculpted greenery.

Surrounded by a 17th-century manor house, this destination is a verdant jewel in a tranquil setting that should be explored at leisure. Come here to marvel at over 300 topiary displays (including ivy, hornbeam, box and yew), hand clipped plant sculptures, ornamental lakes, vegetable plots and more.

These exotic gardens are perched over 4,600 square feet above the azure Mediterranean sea overlooking the Provençal village of Èze, offering unparalleled views to visitors. Beautiful in the spring, you’ll be able to enjoy awe-inspiring panoramas of the French Riviera, as well as the mountains of Esterel and a glimpse of Saint Tropez, too.

Planted (literally) on the site of an old fortress, the Jardin Botanique d’Èze was developed after World War II by the mayor of the village. Go for a stroll in this charming spot and simply revel in its botanical beauty for an afternoon: a maze of aloes, agapanthus, euphorbia and much more.

The château of Villandry’s ornamental kitchen garden is a perfectly landscaped delight that will have avid gardeners filled with inspiration for their own spring planting projects. The 16th-century-style garden is a maze of vegetables and flowers planted in a geometric fashion with an alternating rainbow of color. Think emerald-hued carrot tops paired with rich purple cabbages and blooming rose bushes… all gives the impression of an elaborate chessboard.

The fairytale property (which was once a medieval fortress) is located in the quaint little town of the same name. In the early 20th-century, it was restored by Dr. Joachim Carvallo when he first aquired the estate. Carvallo reimagined the garden entirely, returning it to its former Renaissance glory —  hitherto a 19th-century jardin à l’anglaise (“English-style landscaped garden”).

The Gardens of Chambord

The bucolic romance that characterizes the château de Chambord’s elegant French formal gardens makes them a firm favorite with visitors worldwide. Combined with its epic castle — the royal pied-à-terre commissioned by François I — it’s no wonder the grounds of Chambord have captured people’s imagination for centuries.

Recently renovated, these gardens are an exercise in precision and intended to be a restoration of the gardens of Chambord during the rule of Louis XIV. The château de Chambord park itself is the largest walled enclosed park in Europe (over 13,440 acres) and home to a diverse range of flora and fauna for all to enjoy.

Just outside of Bayeux, Normandy, you’ll find the award-winning Jardins de Castillon. Primarily designed by gardening enthusiasts Colette and Hubert Sainte-Beuve, it was opened to the public in 1985 and remains a great source of inspiration for any keen landscapers.

It is a rambling, famous French garden filled with a cornucopia of plants, many hidden corners and inventive topiary designs, considered to be one of the country’s most beautiful. Go in the spring to see it really come into full bloom.

Not far from the iconic Mont-Saint Michel along the vast stretch of the calm Brittany coastline, the hidden beauty of the Jardins de la Ballue awaits. This famous, French 17th-century-inspired baroque garden  (which borders a charming château) was constructed over 30 years ago and is a blissfully peaceful way to while away an afternoon.

Its magnificent garden design was carefully curated by Claude Arthaud and her architect husband, François Hébert-Stevens, when they took over the property in 1973. Come in the spring to see this enchanting French garden bloom into a riot of color.

The Beauty of the Château & Jardins de...