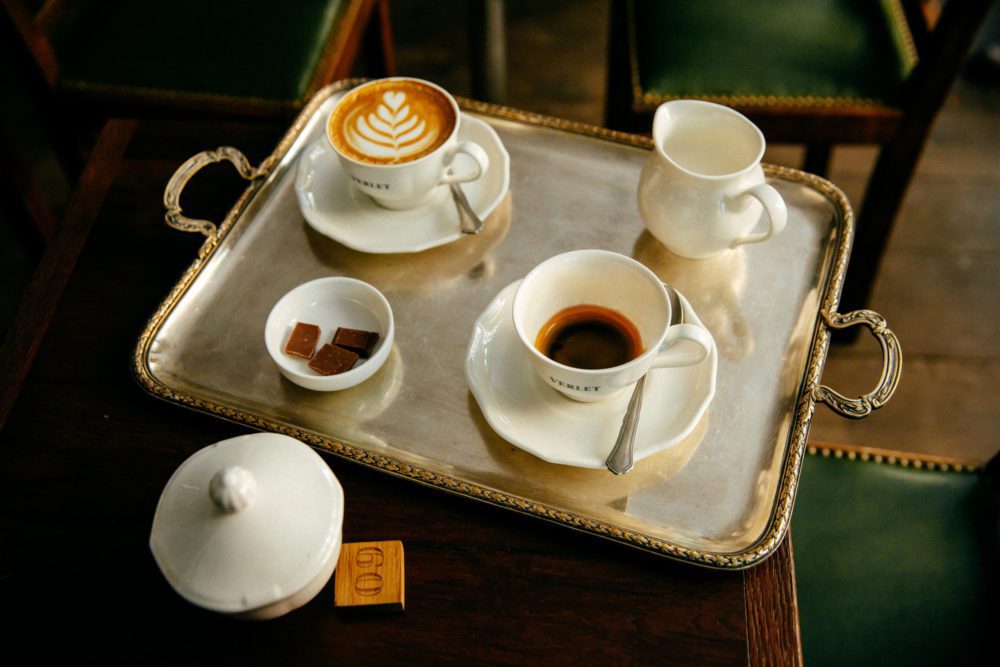 When you think of Paris, undoubtedly one of the first images that comes to mind is a traditional French café. Rich in history and often accompanied by a terrasse (terrace), filled no matter the season, a classic café in Paris is the ideal spot to people watch while enjoying a quick caffeinated pick-me-up, a luxuriously slow midday meal or a happy hour apéro.

Read on for a few of our favorite classic cafés in Paris that truly embody the heart and soul of the City of Light.

The History of Paris’ Café Culture

It was the arrival of the coffee bean to Paris in 1644 that would later spark the concept of le café. Le Procope – officially Paris’ oldest classic café – was opened in 1686, in the 6th arrondissement. The café was a place to exchange news or gossip around the drink-of-the-moment – coffee. The 1700s saw the café really take off, and it became a largely male space where political matters were discussed, especially during the Revolution. But it was in the Restoration Period that the café transitioned into a more relaxed place, centered around social gatherings.

From the historic Left Bank – where Simone de Beauvoir and Ernest Hemingway would set the world to rights at Café de Flore – to the buzz of Paris’ epicenter, Opéra, these are our favorite classic Paris cafés that you should add to your must-visit list.

One of the oldest and most upscale of Paris’ classic cafés is the famous Café de Flore, first opened in the 1880s. Situated on a charming corner in one of Paris’ chicest neighborhoods – Saint-Germain-des-Prés – Café de Flore was a popular hub to some of the city’s most prolific writers and philosophers (it famously hosted the passionate discussions of Jean-Paul Sartre and Simone de Beauvoir!). Today, it remains just as much of a destination for both tourists and the Parisian elite. 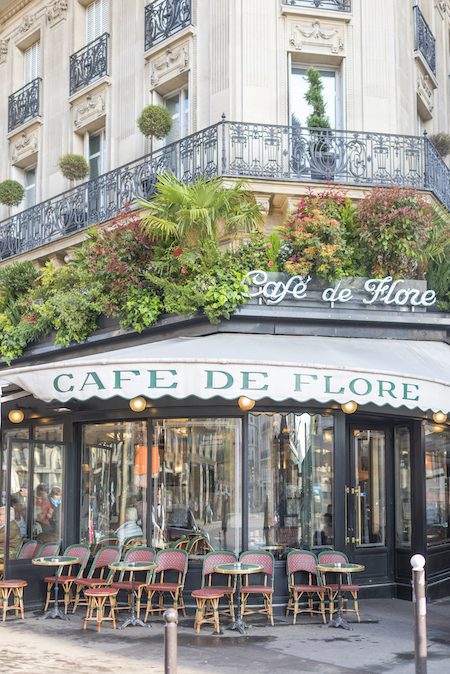 Another classic Paris café loved by the city’s well-to-do can be found just across the street from Café de Flore, Les Deux Magots.

Les Deux Magots, or “the two Chinese figurines,” pays homage to the café’s origins as a fabric and novelty shop of the same name (when you go inside, look up and you’ll notice the two mandarin statues that preside over the dining area). When the shop turned into a brasserie and moved to Saint-Germain in 1885, it became another historically iconic meeting place for Paris’ intellectual crowd, frequented by such famous patrons as Albert Camus, James Joyce, Pablo Picasso and Ernest Hemingway.

If you manage to snag a spot on the terrace, you’ll have a lovely view of the neighborhood’s church over which to enjoy your traditional French fare. 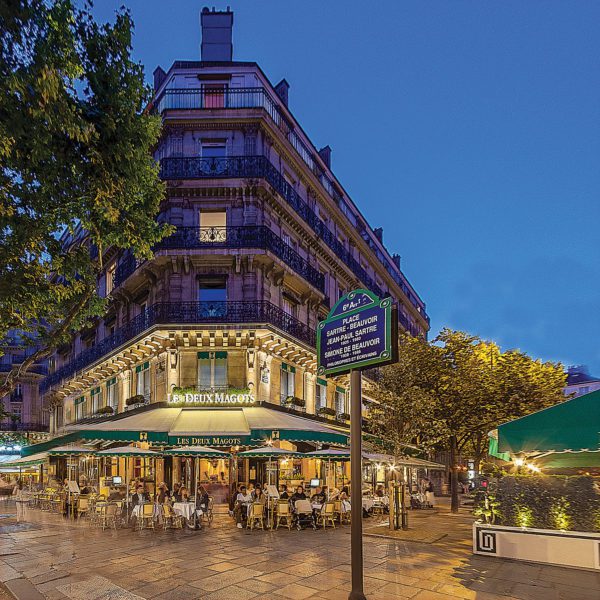 With ornate gilding and frescoes adorning the interior, Café de la Paix is extravagant enough to be mistaken for a museum. Situated within the legendary Intercontinental Paris Le Grand Hotel, this iconic Parisian café offers Michelin-starred “classic contemporary” French cuisine and an indoor terrace that unfolds (weather-permitting) into its famous outdoor terrace with an unparalleled view of the breathtaking Paris Opéra Garnier. Opened in 1862, it was declared a historical site by the government in 1975.

Famously loved by writers such as Emile Zola, Guy de Maupassant and Oscar Wilde, you are assured to be in good company at this top-notch classic cafe experience.

Read next: Chocolate Shops in Paris

For an impressive classic café experience, look no further than Café Verlet. Famed for its bustling atmosphere, decadent desserts and grandiose selection of teas and coffees, Parisians and tourists alike flock to this half shop, half café to restock their homes and enjoy a delicious treat.

A purveyor of fine teas and coffees since 1880, Verlet is Paris’ oldest operating coffee company and an innovator and perfecter of their craft. The scent of roasting beans wafts through the room, designed in a 1920s-style with mirrored walls, cozy side tables and gleaming parquet floor. In the fragrant drawers of the grand counter and on mesmerizing shelves lined with pots you’ll find over 30 coffee and 40 tea varieties from the best plantations in the world. A must-see for caffeine enthusiasts.

Café Verlet is just a quick jaunt from the Palais Royal and the Louvre – break up your sightseeing with an éclair or millefeuille from their renowned pastry chef, Carl Marletti, or settle in for a luxuriously slow lunch with the homemade oeuf cocotte (baked eggs), waffles or French toast. 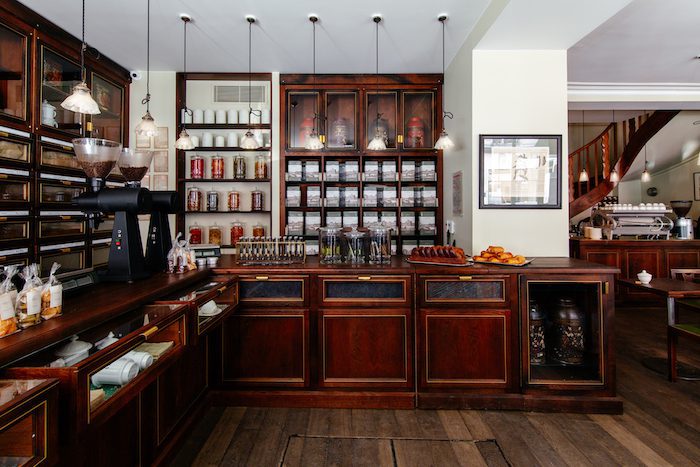 For a café that’s a little more under the radar, but by no means less authentic, make your way to La Palette. A favorite of artists such as Pablo Picasso, Braque and Paul Cézanne, as well as late rockstar Jim Morrison, it’s easy to see why this classic café was and still is a favorite amongst the cool crowd.

Surrounded by art galleries, bookshops and antique dealers, La Palette is a hotspot of local neighborhood charm. Classified by the French government as a historical monument, the café’s walls display original artworks from the time of its opening over a century ago (it’s rumored that the owners used to accept work from young artists in exchange for their debts).

By day you’ll find La Palette a bit quieter, with regulars working on their laptops or enjoying a nice lunch, but come apéro hour, prepare to make way for a chic Parisian crowd bustling for a coveted spot on the terrace. 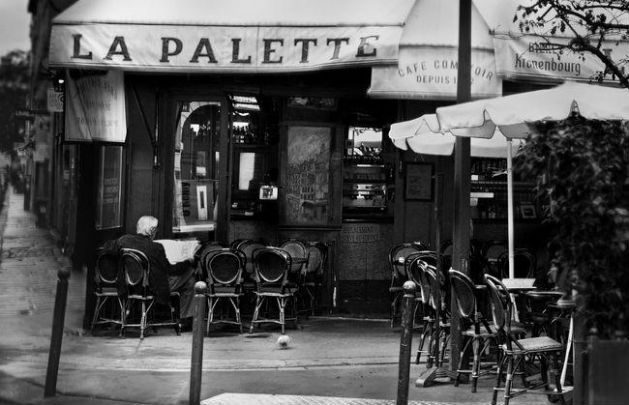 Which of these classic Paris cafés is your favorite? Let us know in the comments below!

get the MFCH Paris Guide

Inside The November/December 21 Issue