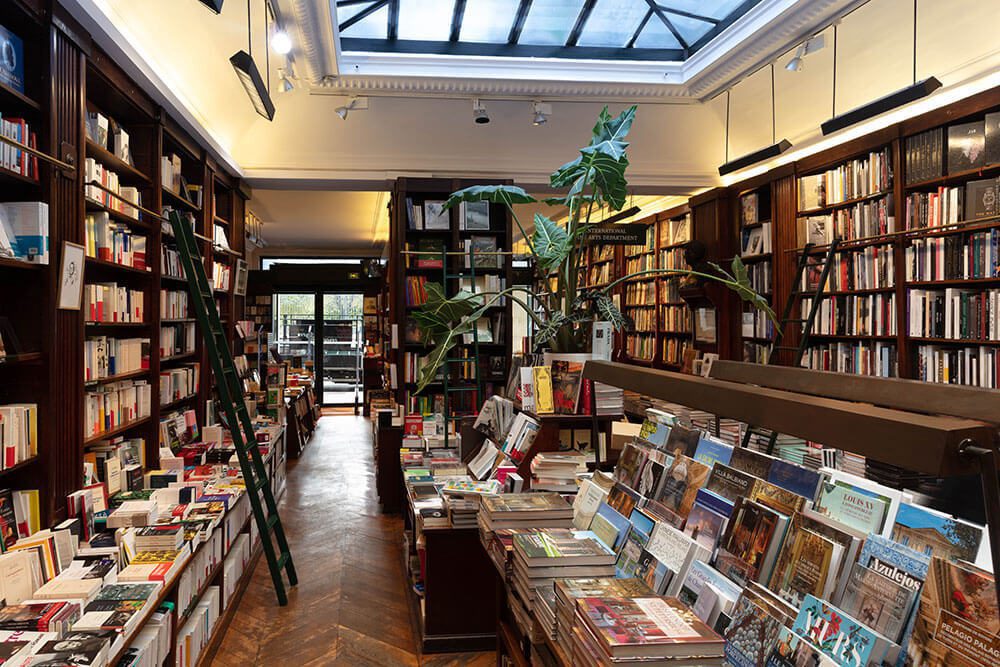 Finding a friendly English-speaking community in the proud French capital can sometimes be a challenge… But one place you can always ensure to be among good anglophone company is in Paris’ English-language bookstores.

Dotted mainly along the neighborhoods bordering the Seine River, these wonderful – and deeply historic – establishments open a portal to a coveted, familiar universe of English literature in a foreign land. All offering a plethora of titles – recent and dated, new and used – you are bound to find a book that transports your imagination further than any plane could take you.

Read on for our personal recommendations of the best English bookstores in Paris, where the experience inside the store is just as marvelous as the mind’s journey through the pages of a book.

Tucked away down an unassuming alley in the heart of Paris’ Quartier Latin (Latin Quarter) is a tiny storefront overflowing with stacks of books, seducing visitors to fall into its charming rabbit hole of literature. Bursting from the shelves with both new and old titles, a visit to this enchanting bookstore is surely an experience you won’t soon forget.

Started by Canadian owner Brian Spence in 1989, The Abbey Bookshop is not only tightly packed with pages but also deeply rooted in history. The alluring street where it is situated, rue de la Parcheminerie, was originally named rue des Ecrivains for the scribes that ruled the book trade in France until parchment makers replaced them in the Middle Ages. Thanks to the Abbey, the book market is back in its rightful place on this historic street in an 18th century building with a gorgeous façade protected as an official monument.

P.S. You can find the MFCH Magazine here among the shelves!

A trip to Paris would not be complete without a visit to Shakespeare and Company. Originally opened in 1951 under the name Le Mistral, American founder George Whitman changed the name of the store in April 1964, on the 400th birthday of William Shakespeare, in honor of Sylvia Beach who founded the original Shakespeare and Company in 1919 at 12 rue de l’Odéon.

Located across the Seine from the Notre Dame at Kilometer Zero, the point at which all French roads begin, George Whitman’s store carries on the spirit of Sylvia’s original bookshop which served as a gathering space for the greatest English and French writers of the time. Founded with the motto, “be not inhospitable to strangers lest they be angels in disguise,” this Left Bank institution is sure to make all feel welcome among its bookcases and reading nooks.

A good book with a hot cup of tea makes for a positively perfect combination. Formerly known as WHSmith & Son, this British bookstore and tearoom across from the Jardin des Tuileries is one of the oldest in Paris. Opened by the Neal brothers in 1870 and bought by the WHSmith & Son family in 1903, the shop served as a favorite meeting place amongst Parisians looking to experience traditional English teatime.

Thriving during the first half of the 20th century, it was relinquished only briefly during the German occupation, serving as a Nazi propaganda store. Soon after Paris’ liberation in 1944, WHSmith quickly reclaimed the shop and reopened with flying colors. Closed for refurbishment in 2021 – the first time since 1944 – the simplified Smith & Son features expanded wall shelves with a restored central staircase, original 1908 stained glass, and three tasting rooms.

Hearing the crackle of opening a new novel and creasing the paper is nice but sifting through the worn pages of a used book adds something special to the reader’s journey. At San Francisco Book Company, all their inventory is second-hand, but they receive recently published works frequently.

Founded in 1997, this bookshop in the Odéon neighborhood both sells and buys books of all kinds in all quantities. There is always a buyer in the store if you’re looking to sell, and they offer a higher rate if you exchange it for a credit on their inventory. A book for a book sounds like a great deal if you ask us…

Brentano’s opened as an independent bookstore in New York City in 1853 by Arthur Brentano who expanded the chain to major cities around the U.S., and in 1887, to Paris. The firm was once the largest bookstore chain in the U.S., but sadly had to file for bankruptcy at the onset of the Great Depression in 1933.

While the Brentano family owned the European stores in Paris and London, luckily, they were not under the same American corporation that was affected by the bankruptcy. Today, the Paris location is the only original Brentano’s left, situated on the bustling avenue de l’Opéra, catering a large selection of books and fanciful objects making for great souvenirs.

The Italian Galignani family was one of the first to use the newly invented printing press in the early 1500s to widely distribute their books. Passing down the trade over centuries in Venice, Giovanni Antonio Galignani moved to Paris in 1801 when he opened a publishing house with a bookshop and reading room that specialized in the English language on rue Vivienne.

Moving to its current address on rue de Rivoli in 1856, the Librairie Galignani is still owned by direct Galignani descendants today. The publishing house was discontinued, but the bookshop still thrives. Faithful to tradition, the store provides world-class service to cultivated readers in many categories, with a particular fortitude in the Fine Arts department.

Most of these bookstores are proudly open 7 days a week, year-round. Check their websites for hours, and don’t be afraid to say “hello!”

Read next: Paris’ Most Spectacular Libraries