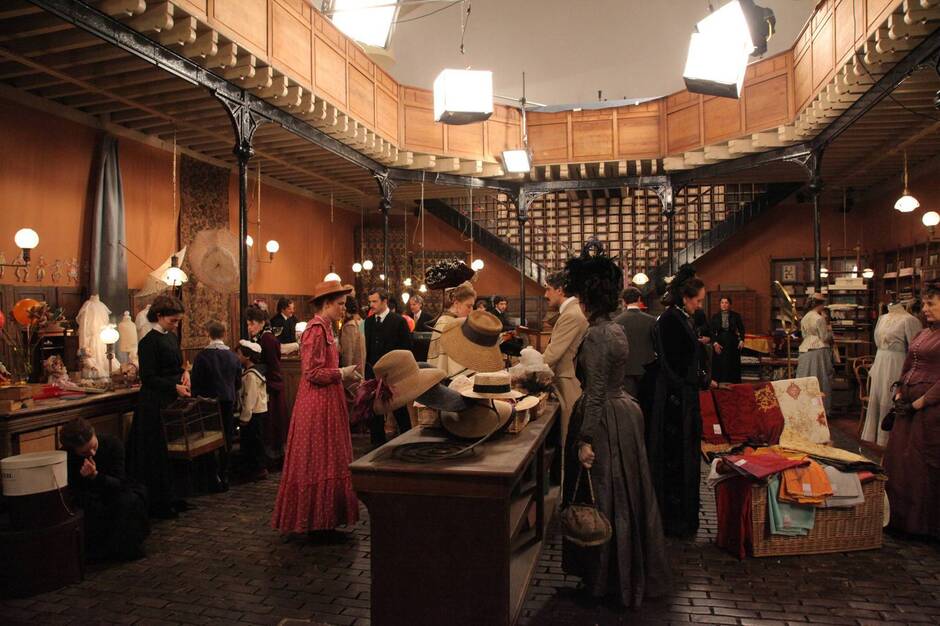 Photo: Reconstruction of the interior of Bon Marché in the 1800s for docu-series on Arte

​​As with any phenomenon in France, there’s a fascinatingly historical – yet mildly debatable – account of how it got started. The bi-annual soldes are no exception.

The soldes period is the time of year when stores in France are allowed to put their items on sale to make room for the new products and collections to come. Unlike the United States which runs sales year-round, French stores are only allowed to put their products on sale for four weeks twice per year – in January and July.

The concept of putting products on sale dates back to the early 1800s with a man by the name of Simon Mannoury. Mannoury had a wildly creative spirit with plenty of imaginative and innovative ideas for things to sell in his fabric and clothing store in the 6th arrondissement of Paris. But with so much variety, not all of it caught on with the public… at first.

Mannoury then came up with an imaginative and innovative idea on how to sell the things that weren’t moving: slash the prices! He quickly figured out that the best way to make room for all his new developments was to liquidate the old product by putting it on promotion to motivate buyers to move it out of the store faster. And thus, les soldes were born.

This sales idea was quickly adopted in other stores and was most popularized by a former employee of Mannoury, Aristide Boucicaut. This influence was key as Boucicaut and his wife would go on to purchase a haberdashery on rue du Bac which they progressively turned into the luxurious Left Bank institution we all know today as Le Bon Marché.

As time went on, the government started to more strictly enforce when exactly department stores could run their sales. This keeps competition in check and allows French stores to get as much profit as possible for their products. In 2020, the soldes period was even shortened from six weeks to four weeks.

This year, the winter sales start on January 11th and run through February 7th. While, of course, it is most enticing to shop the soldes at the beginning of the sale period to get the most options, the discount does get deeper and deeper as the weeks go on. So, if there is something that has been on your radar that you have been waiting to see go down in price, jump on the sale early – as there is a high chance it could sell out. But, if you are just looking to peruse French products at an attractive price, wait until the end when the prices will be lowest.

For more tips and tricks to navigating the French soldes, be sure to get your copy of the January/February 23 MFCH magazine where our columnist and long-time French culture connoisseur Tish Jett spills all her secrets to maximizing the sales in “Just Between Us.”

In the meantime, here is a list of some of our favorite French brands who will be offering specials for the soldes this month…

For chic, modern styles with all the latest trends: Maje, Sézane and The Kooples

For quality self-care in the new year: L’Occitane, Manucurist and Rue du Cachemire

You’re bound to find a few French treasures among les soldes this month. But if you miss out, fear not! You’ll just have to come back around in July…

Read Next: French Fashion for the Holidays

Inside the Jan/Feb 23 Issue