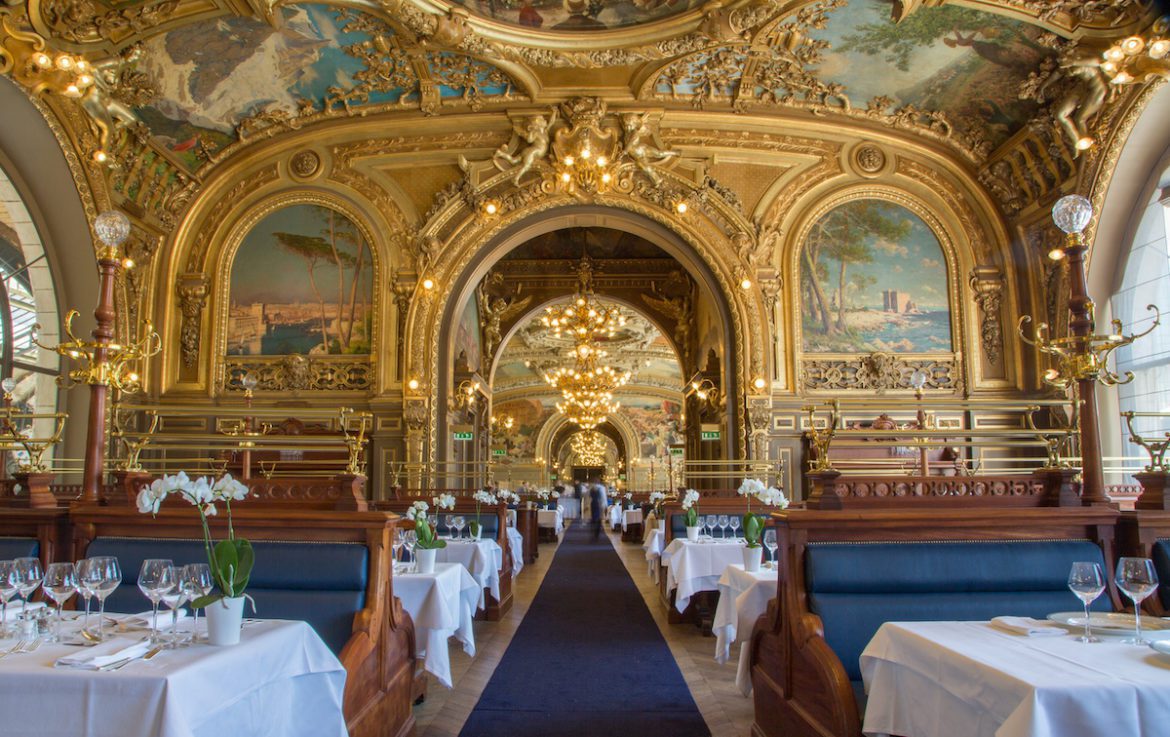 Great restaurateurs know that these days, the decor of an establishment is as important as the menu. In Paris, a land where a different bistro or brasserie beckons you at every corner, modern French restaurants have learned to distinguish themselves not only with their food but with unique interior design.

Read on for six gorgeous Paris restaurants whose seductive surroundings make them stand out from the crowd.

Our Favorite Chic Restaurants in Paris

At Monsieur Bleu, the ambiance is as carefully curated as the plates. This gorgeous restaurant – which resides inside Paris’ renowned Palais de Tokyo – was conceived in a minimalist, Art Deco style by architect Joseph Dirand, and it is nothing short of spectacular.

Featuring green marble detailing, luscious velvet benches and geometric light fixtures, Monsieur Bleu’s design is the epitome of Parisian glamour. And the menu matches the aesthetic; envisioned by the talented and famous chef Benoît Dargère, it is upscale and traditionally French with playful, updated twists.

Don’t miss the magnificent mezzanine on the first floor (reserved for private events, but worth a look), as well as the stunning outdoor terrace with views on the Eiffel Tower. 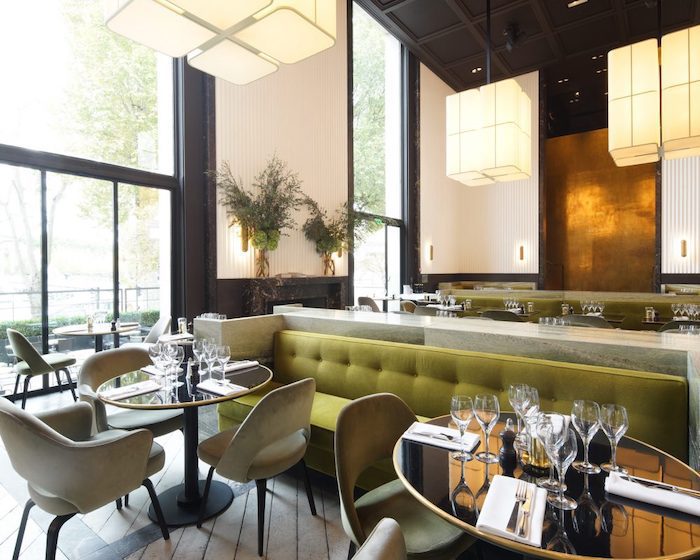 French cuisine at its finest. In the legendary Les Halles district of Paris lies La Poule au Pot, a Michelin-starred restaurant that has been dedicated to bringing delicious French classics to the capital for over 80 years.

Recently overtaken by famous Parisian chef Jean-François Piège, the dishes are directly inspired by bourgeois cuisine and embody French cooking to the core. Offerings on the menu include such delicacies as frog legs in parsley, snails brimming with butter, old-fashioned veal stew and decadently creamy gratins.

Not to be outdone by the food is La Poule au Pot’s gorgeous restaurant design. Its deep red facade matches the interior’s booths, which line mirrored walls and face opposite authentic wooden chairs. The walls are covered with a mix of flowered wallpaper and sparkling gold tiling, lending an overall elegant yet cozy feel, as if you could be in a family home (that is, if your family was incredibly chic). 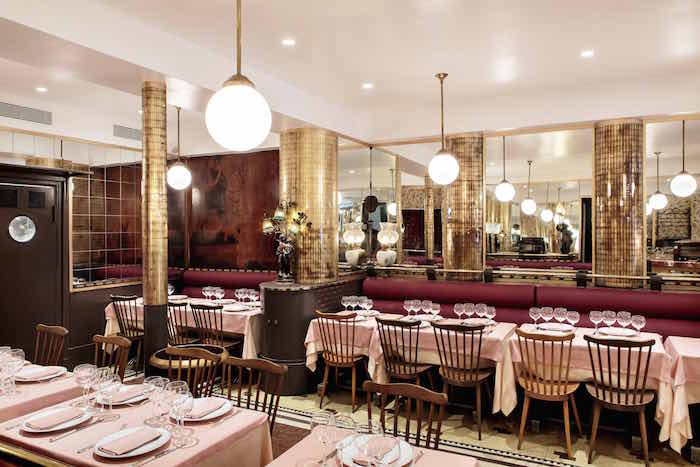 The dining area is intimate yet powerfully designed, opting for chic orange chairs, cement walls, honeycomb carpeting and Baccarat sconces. There is also the sleek open kitchen made of white marble.

But perhaps the most striking design element of this gorgeous Paris restaurant is the fact that it is all overlooked by a magnificent glass roof. Le Grand Restaurant has an extensive wine list – have a glass under the stars. Rest assured you’re in good hands with head sommelier Baptiste Cavagna, named “sommelier of the year” by France’s prestigious Gault & Millau guide. 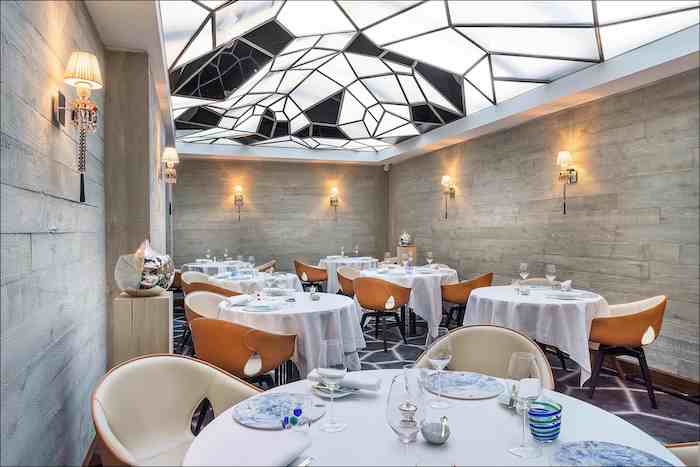 Famed gastronomic restaurant and bar Le Train Bleu was built into the heart of Paris’ Gare de Lyon train station in 1901 by French architect Marius Tudoire (also behind the station’s clock tower). Entering Le Train Bleu – which was declared a historical monument in 1972 – is like walking into the Belle Epoque. It is the extravagant interior – adorned with portraits on the walls and ceilings, gold gilding, twinkling chandeliers and supple leather banquettes – that makes this gorgeous Paris restaurant as much as a feast for the eye as it is for your stomach.

Originally created for the Exposition Universelle, the aim was to recreate it as a place where one could relish a gourmet experience in a luxurious setting. If you’ve set foot in Le Train Bleu, you will see that Tudoire delivered. A hotspot for Paris’ high society and art scene since its unveiling in 1902, it is still known to attract celebrities today.

On the menu? Essentially every rich French delicacy you could desire; think meunière of monkfish tail, duck and foie gras pâté en croûte, cocotte of wild mushrooms, provencal-style lamb and beef tartare seasoned to your liking. Do as the French do, and settle in for a day of decadence with the full “Le Train Bleu Menu,” complete with wine pairings. All in all, this one of Paris’ most chic restaurants. 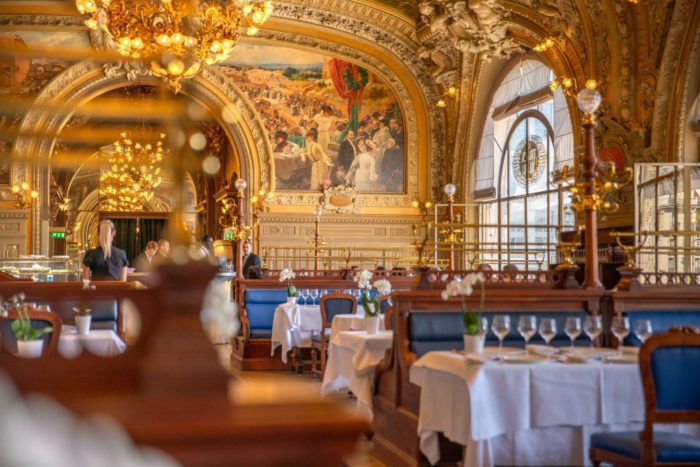 For a gorgeous Paris restaurant that’s a perfect example of well-preserved Art Nouveau design, make your way to Boullion Julien. Known as a “neo-bistro,” Bouillon Julien was a reputed historic haunt for the city’s cultural elite (it’s rumored that French singer Edith Piaf and her lover, champion boxer Marcel Cerdan, would frequently dine at Table 24). First constructed in 1906 by French architect Edouard Fournier, it was only recently restored to glory in 2018.

The Art Nouveau interior of this institution is credited to a number of different artists. The walls are all painted an enchanting sea-foam green, the signature color of the Art Nouveau movement. This plays off the plethora of colors that make up the vibrant stained-glass ceiling, charming red furniture and decorative, painted panels that line the walls. Among the designs on these panels are peacocks, painted by Armand Segaud, while others are graced with nymphs meant to evoke each of the four seasons, designed by Louis Trezel. Hippolyte Boulanger is responsible for the breathtaking floor tile design, which displays a pattern of geraniums and daisies, and the prominent, rich mahogany bar is attributed to the famous French woodworker, Louis Majorelle.

Despite its grandiose beauty, Bouillon Julien has stayed remarkably true to its origins as a bouillon – the term for a restaurant known for quick service and good value that became popular with the working class during the Belle Époque. Stop by for French comfort classics in a gorgeous setting for prices that won’t break the bank. 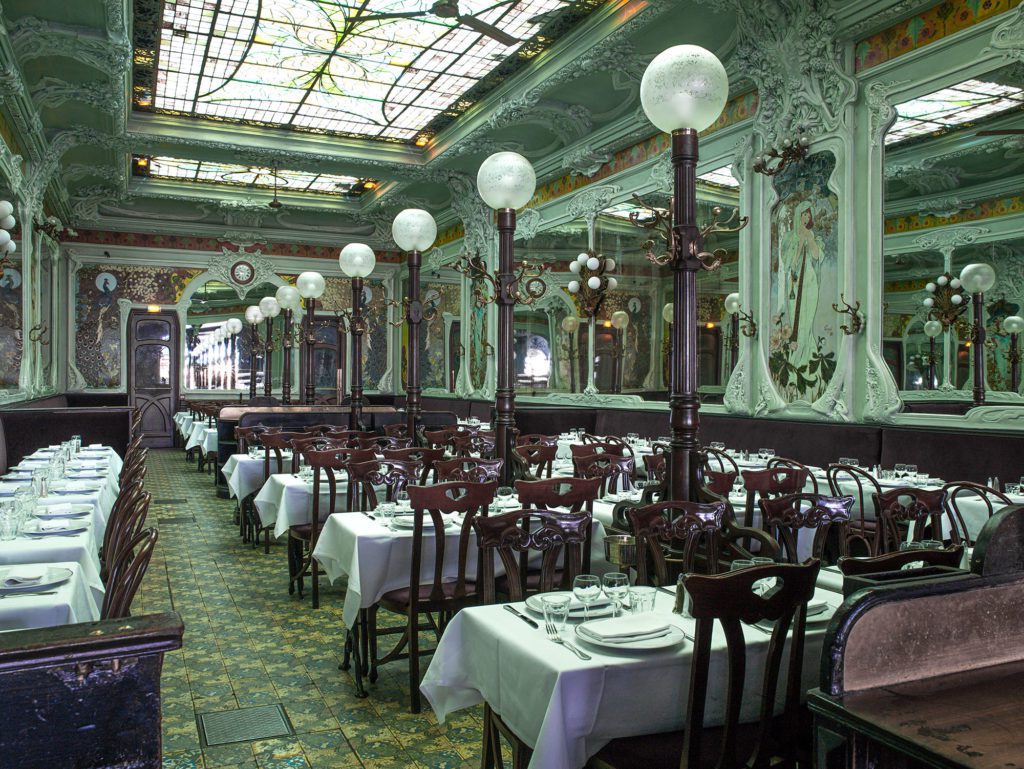 The dining area welcomes you with a truly extraordinary deconstructed chandelier; brilliantly-cut crystals sparkle overhead, each suspended with an invisible wire. Solid oak tables, oversized leather loveseats and “flyer-saucer-style” banquets all contribute to a 1960s-inspired type of elegance.

Ducasse also made a commitment to excellence with the menu. Known for the importance he places on food being in tune with nature, it is focused on seasonal fish, vegetables and grains. The perfect marriage of elegant and chic.

Have you been to any of these gorgeous Paris restaurants? Let us know in the comments below!