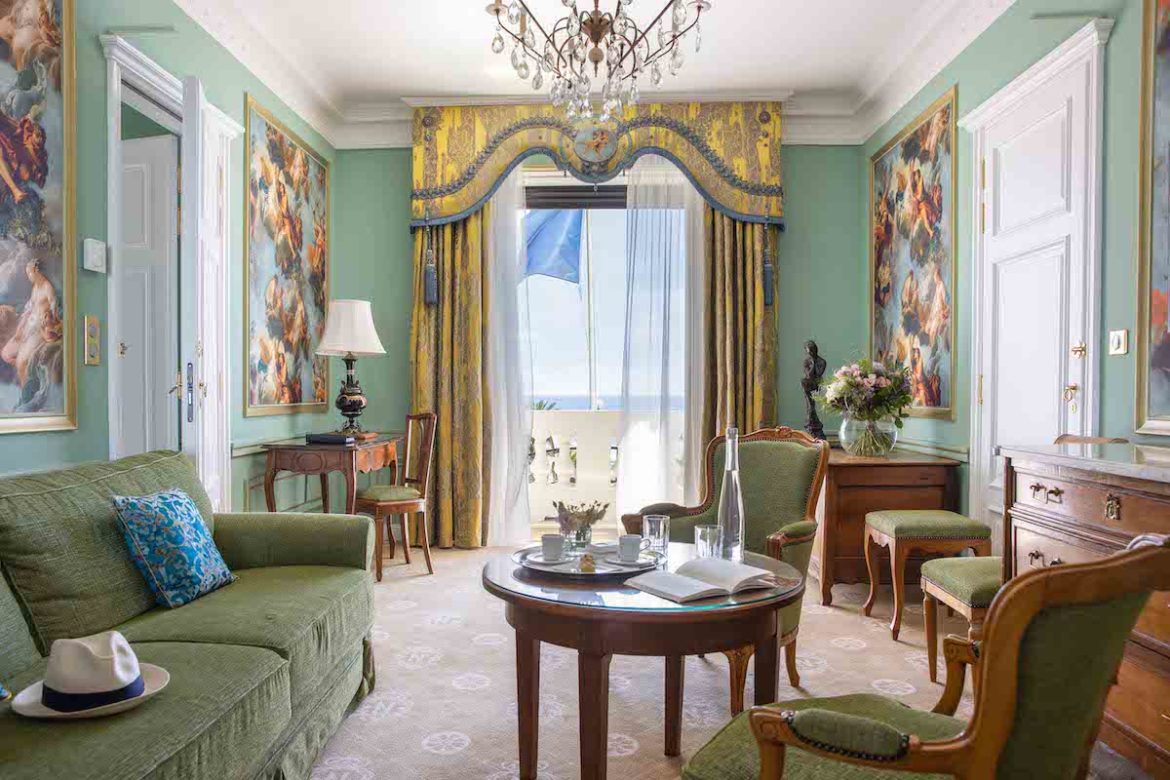 You might think of Nice as only a summer destination, but we’re here to tell you that is simply not true! La Baie des Anges (or the Bay of Angels, as les Niçois call their coastline) takes on a special kind of beauty during the winter months: the crowds thin, and the light changes, giving the sea mesmerizing hues during the evening.

Whichever time of year you choose to visit the French Riviera, let us help you plan your next stay with our guide to the best seaside hotels in Nice, on La Promenade des Anglais: the city’s famous coastal walkway.

At the top of the Promenade, just before reaching the main port of Nice, is the point Rauba-Capeù. Slightly elevated above the rest of the bay, it offers a striking view of the entire coastline. Its name translates to “to steal hats,” in reference to the winds that begin blowing come summer.

The point is graced by some of Nice’s stateliest buildings – imposing, Italian-inspired and built of striking red bricks – and includes one of the city’s most famous hotels: Hôtel Suisse. This 4-star establishment’s myriad balconies present incredible panoramas of the bay’s crystal-blue waters, cementing it as a year-round favorite for both new and repeat visitors alike.

Overlooking the entirety of the city is a hill called La Colline du Château (the Hill of the Castle), once the home to medieval fortifications (now the quarter is known as the Old Town). This tree-covered slope provides much needed shade for the area, and in the evening, it becomes the stunning backdrop to La Pérouse’s cocktail bar. The ideal place to sip a drink and listen to live jazz before heading out for a night – under the lemon trees and in the exclusive and cool atmosphere of a genuine Mediterranean garden.

In the heart of the Old Town, lies l’Hôtel Rossetti. The only hotel on our list without an ocean view.  The hotel is more simple but still has  charm. Nestled in the heart of the ancien quarter, only a couple of minutes walk from the shore, this may be the best place to soak up a truly Niçois experience. Its roof has a secluded terrace that enjoys an intimate sight of the 17th-century Sainte-Réparade Cathedral’s Italian-style cupola, compiled with alternating green, yellow and red tiles. It is also in the middle of Nice’s most active night scene and right next door to the Cours Saleya and its world-famous daily market. This hotel offers the best of both worlds in a truly beautiful setting.

Surprisingly last, but definitely not least, … a stay at Le Negresco is a treat on so many levels, they become hard to list. One of Nice’s most iconic buildings – instantly recognizable when entering the town along the coast – the luxury hotel is famous for more than its architecture. It hosts one of the city’s most impressive art collections, boasting works only shared by the likes of the Louvre Museum and Versailles Palace. The food is equally spectacular, thanks to its flagship: Michelin-starred restaurant Le Chantecler.

And, of course, let us not forget the view: the entire bay stretches out underneath Le Negresco’s feet, while the hills and mountains of Nice loom over it. The attraction of the place is such that even Bill Gates, the richest man in the world at the time, had his blank check rebuffed by Madame Augier, the establishment’s legendary owner. Do not fret, however; unlike prospective buyers, guests are never turned away!

Read Next: Charming Places To Stay in Giverny