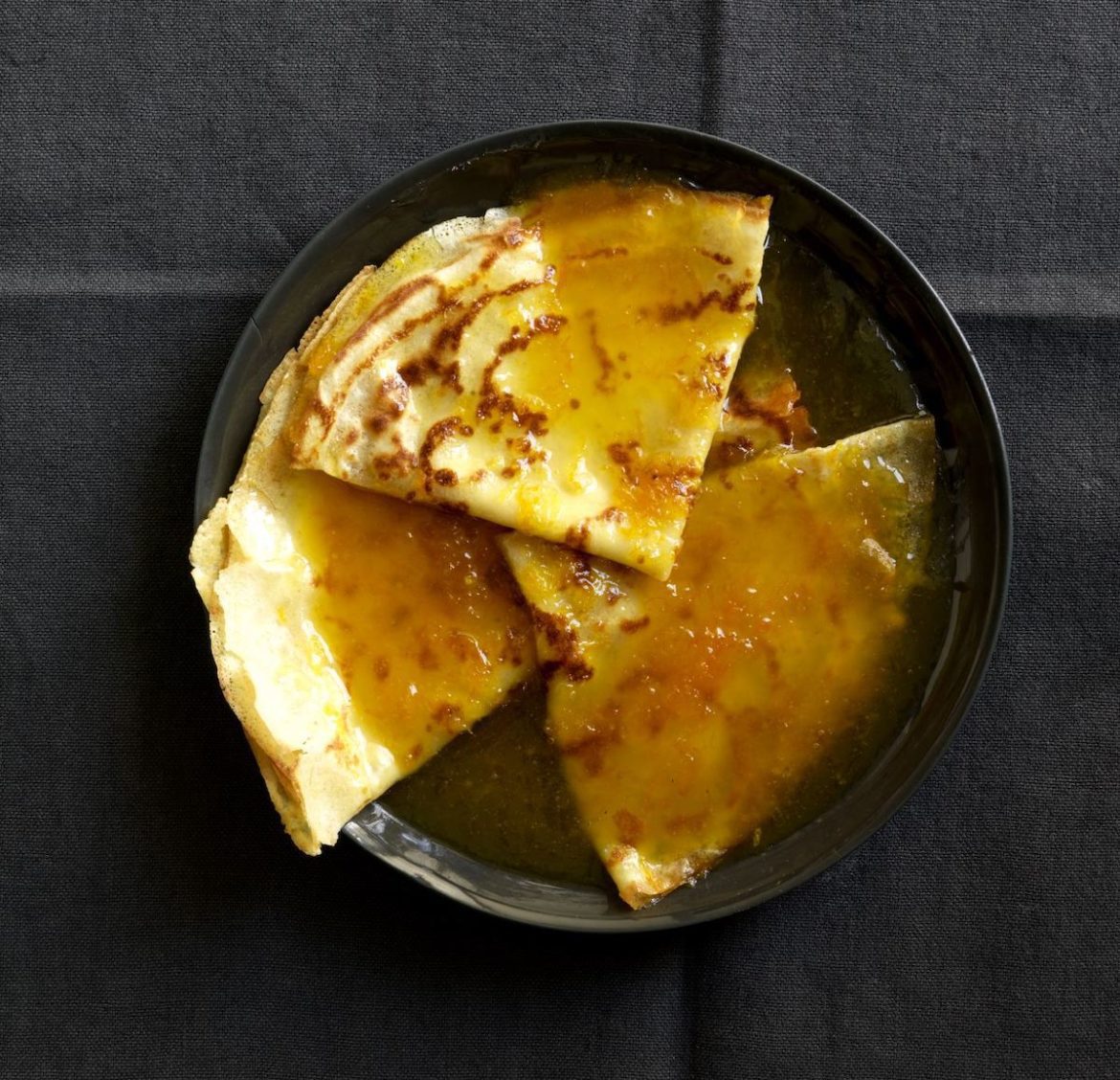 La Chandeleur, our first of two Pancake Days in France, is once again almost upon us!

In France, the land of crêpes, we are doubly blessed. Not only do we celebrate Mardi Gras by eating them – plus all sorts of crisp, fried, sweet doughnuts – but on February 2nd, exactly 40 days after Christmas, friends and families gather to flip and feast on the paper-thin panckackes in celebration of La Chandeleur (Candlemas).

La Chandeleur is not as documented as Mardi Gras – or Shrove Tuesday – and the reasons why crêpes are eaten on this day aren’t quite as clear-cut as the need to empty larders of old flour before Lent. La Chandeleur‘s feast was originally a Pagan one, to celebrate the arrival of spring, but later, in the 5th century, became associated with Christianity. It is said that Pope Gelasius I gave these pancakes to Rome’s poor, with the golden colour and round shape symbolising the sun and the return of light. I love the idea of such a hopeful day, even more poignant this year, although it does not come without its warnings and superstitions…

It is said that if farmers do not eat crêpes at La Chandeleur, their wheat harvest will be poor that year. To be sure of a good crop (and healthy finances), you must flip your first crêpe using your right hand, while holding a Louis d’Or gold coin in the left – and make sure you catch the pancake perfectly in the pan! The coin should then be wrapped in the crêpe and placed on top of a wardrobe until the following year, when, whatever is left of it – along with the coin – it should be given to the first pauper you encounter. This act is said to ensure riches for the entire household.

I’d be surprised if many French homes uphold this tradition today, despite tales of Chandeleur crêpes being kept in wardrobes as lucky charms, but there are plenty of sayings and beliefs around the holiday that persist. “Le soleil de la Chandeleur annonce hiver et malheur” is one, meaning that if the weather is favorable – this is bad news, and winter will be prolonged. The candles traditionally lit at Candlemas are said to ward off evil spirits and risk of fire; to celebrate, all the candles in the house should be lit.

At home with my children on La Chandeleur, with the Christmas and Galette des Rois seasons over and another month of winter to come, it was always a lovely, warm feeling to gather, cook and flip large piles of lacy crêpes together. In the Breton tradition, we sometimes would make savoury versions and galettes, too, using nutty flavoured, greyish buckwheat flour filled with ham, eggs, cheese, cream and mushrooms before making and devouring the sweet wheat flour ones with salted butter, lemon and sugar.

Classic Crêpes Suzettes were also favourite dessert of mine to serve at dinner parties. Easy to prepare in advance and simply reheat (and flambée, if I was in the mood!), I find that served warm and bubbling, with a good vanilla ice cream… everyone loves them. They seem to hit that magical sweet spot between a childhood treat and a grown-up pleasure.

Below, find my simple recipe from my book “100 Desserts to Die For” to get you all whisking and flipping on Februrary 2nd!

Sift the flour into a mixing bowl. Add the sugar, then make a well in the middle and pour in the lightly beaten eggs. Whisk, using an electric beater, gradually incorporating the flour.

Next, pour in the milk, little by little, continuing to beat. Beat until the batter is completely smooth. Finally, add the orange zest and the butter (reserve a little butter for cooking the crêpes).

Heat a crêpe pan, and grease it with a little butter, using some paper towel. Pour in a ladleful of crêpe batter, tilting the pan at the same time, so it covers the whole base. Cook the crêpe until its edges start to colour, then slide a spatula under the crepe and turn it over. Once it is equally brown on the other side, slide it onto a plate and keep warm. Continue until you have used up all of the batter (you should end up with about a dozen).

Gently heat the butter in a frying pan, then add all the other ingredients (including the liqueur, if using), stirring with a wooden spoon. Let the mixture heat and gently bubble before placing the first crêpe in the sauce and reheating it.

Fold the crêpe in half, then over again to make a fan shape. Move it to the side of the pan and continue with the other crêpes. Keep going until all  are coated with sauce and folded up. Serve the crêpes in the pan.

Note: If you like, you can use the liqueur to flambé the crêpes just before serving – or even tableside, like the best French brasseries still do!