An Interview with Author Mark Greenside 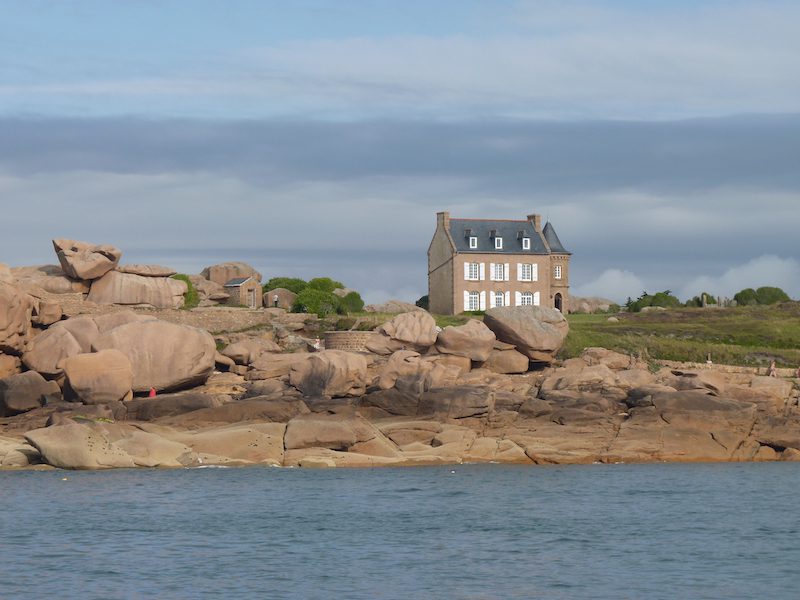 Two decades ago, American Mark Greenside bought a house on a whim in Brittany and began a faux-pas-filled Francophile life. He shares his quirks of French living in his best-selling books (Not Quite) Mastering the Art of French Living and I’ll Never Be French (No Matter What I Do). Penned with humor and clear affection, Mark recounts his daily adventures navigating the country that has become his second home.

Below, we learn more about how he came about his home and what he has learned about France!

Where are you from originally, what brought you to France, what area do you live in, why did you choose the location?

I was born in Brooklyn, grew up on Long Island, went to college and grad school in Madison, Wisconsin, lived in Greensboro, North Carolina for two years and now live in the San Francisco Bay Area. I went to France in 1991 because a Francophillic girlfriend, who had been to Finistère, Brittany and wanted to return, made it clear she would break up with me if I didn’t go with her. I had first been to France in the de Gaulle, anti-Vietnam, anti-American late 1960s and was loathed, so I didn’t want to go. But I went, and I ended up falling out of love with my girlfriend and in love with Brittany: its plush, green landscape; heathered hills; long, white, sandy beaches; pristine seas; huge tides, shimmering light, cotton-candy clouds; endless horizon; and the people — their humor, curiosity, warmth, and genuineness. For me, Finistère, Brittany was, and still is, a fascinating and beautiful, place. It is also affordable.

How did you find your home?

Madame P. was the keeper of the keys to the house my girlfriend and I rented, as well as a one-person tourist information office. She took it upon herself to make sure we had the full Breton experience — from crêpes and pig products to the world’s largest collection of standing stone dolmen, tumuli and menhirs. When it later became clear that my girlfriend and I had broken up, Madame continued showing me Brittany. She spoke no English, I spoke no French, but we spent hours together, laughing, mostly, I think, at me….

One day, as she was showing me another gorgeous medieval village, I repeated one of the few things I knew how to say: “C’est joli, mais je prefer Plobien,” (It’s pretty, but I prefer Poblien – the village we lived in. The next thing I knew, I was standing in front of a Notaire’s office looking at pictures of houses. I was 47 at the time and owned nothing but an 18-year-old Volvo and the clothes in my closet. As far as I was concerned, I was a renter for life. I had no money, hated to fly and didn’t speak French. This didn’t seem like a good idea. Still, it would be rude to dismiss her suggestion without seeming to consider it, so I pointed at three pictures and found myself house-hunting in France. This is how I found myself my home in France: a three-story, 120-year-old stone house with original oak floors, beamed ceilings, five fireplaces, hundred-year-old terracotta tiling, exposed granite walls and cathedral ceilings. It was built on almost an acre of land with apple and quince trees, wild roses and bowling ball-sized hydrangeas, facing a river and the last lock before the sea (so every boat has to pass in front of it). And all for less than the cost of a high-end Mercedes (which I couldn’t afford).

You’ve had the house for two decades, do you feel like a local?

That’s an interesting question. I dress differently (more down to their up, no green or red or plaid pants, or cutesy-saying T-shirt), look different (often unshaven, maybe unkempt, shirt more often out than in), eat differently (at different times, using different spices and foods, switching knife and fork from my right hand to my left), walk (faster), drive (slower), talk (insanely and inanely), but I feel totally at home in Plobien. I know lots of people, and people know me.

I live a very good, full, happy life in Plobien. That said, I know I am not a local and never will be Breton or French. I’m referred to and thought of as “l’americain.” When mail arrives and the poste can’t read the address or recognize the name, it’s delivered to me. And with my wife, Donna — who’s Japanese-American — it’s even clearer that we are not from around those parts. My life is an odd contradiction. In the U.S., I fit in but often feel like an outsider. In Brittany, I’m an outsider but mostly feel like I fit in. I could be fooling myself, or Brittany could be fooling me. Either way, it works.

It’s like living in a different time zone or decade, where doctors make house calls and families eat multi-course homemade dinners together, where Sunday meals last all afternoon; where you know your neighbor (and talk to and rely on them), where you break bread – real bread, where there are 246 non-processed cheeses (and you know the shopkeepers by name)’ where there’s no bulletproof glass in banks, taxis, or the poste; where you can see stars and constellations at night; where hospitals admit you by asking your name, not your insurance provider; where kids have a choice of foods for school lunches that are varied, tasty, and nutritious; where I eat crêpes for breakfast, lunch and dinner and oysters straight from the sea any time of day or year.

What are your other favorite areas of France?

I’ve traveled a lot in France and my favorite places aside from Finistére are the Côte D’Armor, Morbihan and Ille-et-Vilaine in Brittany. The Channel coastline of the Côte D’Armor is composed of the Emerald Coast (Côte d’ Emeraude) and the Rose Granite Coast (Côte de Granit Rose), and both are spectacular. My favorite place is Cap Fréhel, a peninsula jutting into the emerald Channel. Other favorites in Côte D’Armor are the walled, medieval village of Dinan; Sept Ȋle (Seven Island) bird sanctuary, and the island of Bréhat.

Ille-et-Vilaine is best known for the WWII destroyed and rebuilt city of Saint Malo (of All the Light You Cannot See fame) and Dinard with its Promenade du Clair de Lune. There’s also old Rennes, the capital of Brittany, and Vitré and Fougères, two medieval villages with castles; Cancale, the oyster capital of Franc; and the Ȋle-Aux-Moines, a Parisian version of the Hamptons.

Morbihan has the city of Vannes with its kilometers-long Saturday market and huge Festival Interceltique that attracts 700,000 people in August. There’s also Carnac with the longest rows of standing megaliths in the world and the village and medieval chateau in Josselin.

What is most challenging about a bi-continental life?

Wanting or needing something that’s where I’m not. After a while, I learned to double up and keep the same key items in both places: Parker Pen refills, yellow pads, Oxford English dictionaries, measuring cups and spoons in ounces, etc…

The truth is I like both rural village life (Plobien has 600 people) and city life. I like what both have to offer, and I like how I live in both, though Donna and all of my friends say I’m nicer in France. I tell them it’s because my language skills—or lack thereof—keep me in line. Living in both places makes for an interesting life.

Can you give us some examples of funny faux-pas?

More than I’d like… There was the time Donna and I had dinner at Bruno and Françoise’s home, and as we were leaving I said, “La prochaine fois à chez nous. À demain. Bonne nuit” and went home. The following night there was a knock on the door, and there were Bruno and Françoise dressed up and spiffy looking. The good news was Donna and I were also dressed up and spiffy-looking. The bad news was they were dressed and spiffy looking because they thought they were having dinner chez nous (our home), and we were dressed and spiffy looking because we were going to dinner at another friend’s. I felt terrible about misleading them and for their now having to find or cook their own dinner. Then, when I explained I invited them to dinner at some point in the future, Bruno began apologizing for his mistake—“Désolé, désolé,” he said, and I felt even worse….  There was the time I told a neighbor that I bought Madame P chausette (hosiery) instead of arroseur (hose, as in garden hose)… Longue chausette, I told him…. When I first arrived in Plobien I didn’t know the word for milk, so I asked for “jus de vache” (juice of cow) and “un poulet beaucoup de promenade” (a chicken that walks around a lot) for a free-range chicken. I’d tell you about “mon vie” and “ma vie” and buying an ice cream cone, but I don’t think the magazine will print it.

What is the hardest part of navigating French life?

What is your favorite part about French culture?

Le bon geste (the right gesture), which means doing the right thing. Le bon mot (saying the right thing) is also important – though obviously much less so for me. French people want to be right and do right and not break the rules. Despite how they’re often popularly portrayed as rude and lascivious, people have been moral, generous, thoughtful, helpful and kind – even in Paris. In the U.S., people seem to live by “I seen my opportunities and I took them.” In France, at least Plobien, it’s more like ‘What can I do for you, and what do you need?” Le bon geste: it’s a good way to live.

What are the best tips for mastering the art of French living?

Think like the parent or grandparent of a three-year-old: When asking for something, say please: “s’il vous plaît.” After getting what you asked for, say thank you: “merci.” When meeting anyone, whether a dear friend or stranger, and especially when entering any shop, business, or office, say hello: “bonjour.” When leaving, say goodbye: “au revoir.” Anything more than that is gravy, so ladle it on. Bad French – at least for a foreigner, especially an English-speaking foreigner – is better than no French.

Learn more about Mark and his work at www.markgreenside.com

Don’t miss (Not Quite) Mastering the Art of French Living in the MFCH Book Club in our upcoming Jul/Aug 21 issue!